About the Anaheim Convention Center

The Anaheim Convention Center first became a meetings and conventions destination in 1967, and the original construction consisted of the domed Arena, which stands on Katella Avenue, an Exhibit Hall and Meeting Space. Since those early days, the Anaheim Convention Center has completed a total of 7 expansions plus several cosmetic renovations to update the Convention Center. Five of the major expansions provided additional exhibit hall and meeting room space. While the 5th expansion, completed in January 2000 resulted in a complete transformation of the Anaheim Convention Center and surrounding campus, the 6th expansion, completed in January 2013, was the Grand Plaza, a 100,000 square feet of exterior space offering meeting planners the opportunity for large outdoor gatherings including alfresco dining, concerts, receptions, exhibitions, meetings and more. The Grand Plaza's singular design makes it unique among outdoor event venues and extremely versatile to accommodate almost any event.
The Anaheim Convention Center had the grand opening of the 7th expansion referred to ACC North on September 26, 2017. This expansion is situated on what was formerly car park 1 and added 200,000 square feet of flexible space, which can be used for exhibits, meeting rooms or ballroom functions and includes a parking structure with 1,400 spaces. This expansion increases potential exhibit space beyond the 1 million square foot mark cementing the position of the Anaheim Convention Center as the largest convention center on the west coast of the United States.

The Anaheim Convention Center with 1.15 million square feet of exhibit space is the largest exhibit facility on the West Coast. All halls are directly accessible from spacious lobby/registration pre-function areas. ACC North with 200,000 square feet of exhibit space is connected to the other halls via an enclosed temperature controlled bridge to the second level of the main building.

All the meeting and ballroom space in the Anaheim Convention Center has been newly constructed. Space totals 130,000 square feet which conveniently occupies the 2nd and 3rd levels, directly above the exhibit halls.

In keeping with the industry trend which places an emphasis on more meeting rooms, the meeting space of the Anaheim Convention Center is directly above the main entrance. Dedicated registration/prefunction areas open balcony-style onto the atrium towers. Attendees enjoy views through the glass walls, down Convention Way and across Katella toward Disney's theme parks. The Katella Terrace at ACC North overlooks Katella Avenue and gives an uninterrupted view of the Disneyland fireworks.

Meeting and ballroom space is flexibly designed to accommodate almost any size meeting. Moveable walls divide spaces into small break out rooms, or can be folded away for general sessions. The ballroom is one of the largest available in any convention center, 38,058 square feet.

The City of Anaheim, Disney and the Anaheim/Orange County Visitor and Convention Bureau have pooled their resources to create the Anaheim Resort. Every inch of the 1,100 acre Anaheim Resort district have been transformed. Both Disney parks; Disneyland and Disney's California Adventure, the Anaheim Convention Center and the convention hotels are enveloped by the lush gardens of the new resort environment.

The landscaping, pedestrian avenues, traffic thoroughfares, signage and infrastructure have been entirely recreated. The metamorphosis of Anaheim offers visitors a fresh upscale ambiance with the creation of the Anaheim Resort. 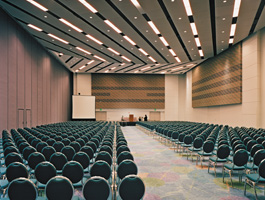