Clementine Zimmerman Schmidt pursued her relationship with August Langenberger, a widower and local business leader, following the departure of her husband Theodore Schmidt from Anaheim in 1871 for Prussia and New York. Two months after receiving her divorce from Theodore Schmidt, Clementine married August Langenberger in Anaheim on April 15, 1874. Their happiness was soon dampened by the accidental hunting death of T. Edward Schmidt, the first born of Theodore Schmidt and Clementine, on February 8, 1874, just six days after the divorce was finalized.

Following their wedding, August Langenberger and his seven children from his first marriage, aged twenty-four through twelve, joined Clementine and her four children, aged thirteen through seven, all began living together in the house originally built by Theodore Schmidt on the northwest corner of Lemon and Center Streets (now Lincoln Ave.) in 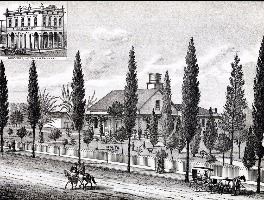 Anaheim. The newlyweds were blessed with the birth of twins Maria Louisa (“Mable”) and Amadeus Gustavus (“Gus”) Langenberger on November 8, 1875, By all accounts; this early example of the modern “blended” family, cohabitated quite harmoniously and remained a tight knit family throughout their lifetime.

In 1883, August and Clementine Langenberger built a twelve room Victorian formal residence on the northwest corner of Lemon and Sycamore Streets to accommodate their large family. Named “Villa Mon Plaisir” (“Home of My Pleasure”) by Clementine, the grounds of the estate were lushly landscaped with more than three hundred varieties of trees and shrubs, including twenty-two specimens of palms. Known for their hospitality, Clementine and August entertained members of the southland’s most prominent families at their home, including the famous actress Madame Helena Modjeska, who became close personal friend and Godmother to her grandchildren.

As the Schmidt and Langenberger children grew older, they gradually left the Langenberger residence to pursue educational or occupational opportunities, or to marry and set up their own domiciles. Although Clementine missed having her children living close at home, she filled her 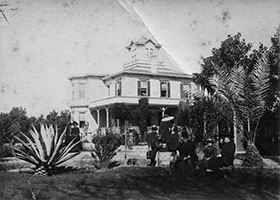 days with civic activities and charity work. She was particularly supportive of St. Boniface Catholic Church and St. Catherine’s Orphanage.

In 1895, Clementine endured a double tragedy – the death in April of her beloved husband, August Langenberger, and the death in October of her son, William Schmidt, who was only twenty-nine years old. Clementine was now responsible for the Schmidt-Langenberger business empire in Anaheim, including a forty-acre orange grove, investments and real estate holdings. A highly educated woman, she managed her financial affairs with consummate skill and was not afraid to fight for what she believed in. In 1901 she won a lawsuit in the California Supreme Court against the City of Anaheim, upholding her ownership of property at the northwest corner of Palm (now Harbor) and Center (now Lincoln) Streets, later the site of St. Boniface Catholic Church.

Clementine Zimmerman Schmidt Langenberger passed away on October 8, 1913 while visiting her son, Gus Langenberger, in San Francisco. Following a funeral service at St. Boniface, she was interred at the side of August Langenberger in the Anaheim Cemetery.  With her passing, Anaheim lost the last surviving shareholder, who had founded the Los Angeles Vineyard Society and pioneered the settlement of Anaheim. 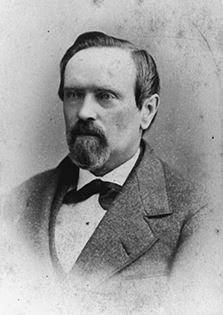