Measure J, a ballot measure updating Anaheim’s hotel, motel and short-term rental tax, was approved by voters in the Nov. 8 election with changes to how the tax is collected and provided to the city.

Measure J was approved by 41,143 Anaheim voters, or 59 percent of those who voted on the measure.

Anaheim’s City Council accepted the Measure J election results as well as those of other city voting on Dec. 6.

The City Council on Tuesday, Dec. 20, is set to consider updates to the Anaheim Municipal Code reflecting the changes brought by Measure J.

Implementation of Measure J changes are underway and set to be complete in early 2023.

In July, Measure J was placed on the November ballot by Anaheim’s City Council to address a gap in the city’s hotel tax paid by those staying at a hotel, motel or short-term rental in our city.

The measure updates the Anaheim Municipal Code to require online and other travel companies to apply taxes based on the full amount someone pays for lodging in our city.

Before Measure J, an inconsistency in the hotel tax section of the municipal code resulted in online and other travel companies only having to charge tax on a flat rate agreed to with hotels, motels and short-term rentals rather than on what someone actually ended up paying for lodging.

What Measure J does

Measure J broadens Anaheim’s definition of a lodging “operator” to include online and other travel companies along with hotels, motels and short-term rentals.

It also clearly spells out that overnight guest parking, resort fees, internet and other lodging charges continue to be covered by Anaheim’s hotel tax.

Here’s an at-a-glance breakdown of changes being implemented and how Anaheim’s hotel tax is set to be collected and remitted to the city:

What Measure J does not do

Measure J does not create a new tax or increase Anaheim’s hotel tax rate but ensures it is applied evenly across lodging booked in our city.

The city’s hotel tax is paid only by visitors and guests at Anaheim hotels, motels and short term rentals. Residents would only incur or pay the tax if they stayed at a hotel or motel in our city.

For those booking rooms and staying at Anaheim hotels and motels, Measure J does mean that the city’s hotel tax will be applied to the full retail rate they pay for a room, instead of just to a flat rate paid by online and other travel companies.

Anaheim's hotel tax is the primary source of funding for public safety, community services and city obligations. For the 12 months through June 2022, Anaheim saw $167 million in hotel tax revenue that went directly toward police, fire, parks, library, community center and other city staffing to serve residents, businesses and visitors.

Hotel tax revenue also goes toward remaining debt from the 1990s expansion of The Anaheim Resort.

The city’s audit manager estimates the update could generate up to $3 million in additional hotel tax collected annually that would go toward public safety, community services and city bond obligations. 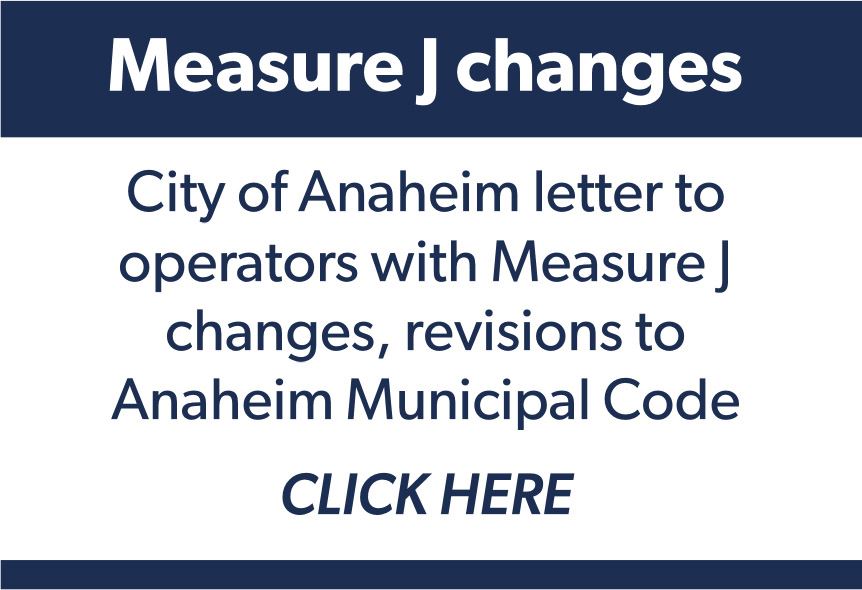