In December 2008, the City Council adopted the Hoskins Historic District. This is a small neighborhood that was carved from the north end within the original Anaheim Colony Historic District and became its own independent district because it has an intact collection of interesting homes built in the 1940s and 1950s. It represents a more modern time in Anaheim’s history, an era immediately following WWII.

Properties
There are 53 properties in this district of which 43 are considered to be Qualified Historic Structures.

Ranch Style
Driving down the streets of this district brings back thoughts of familiar Ranch style houses that were just evolving as homes favored by Anaheim’s middle class community leaders. 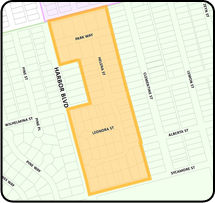